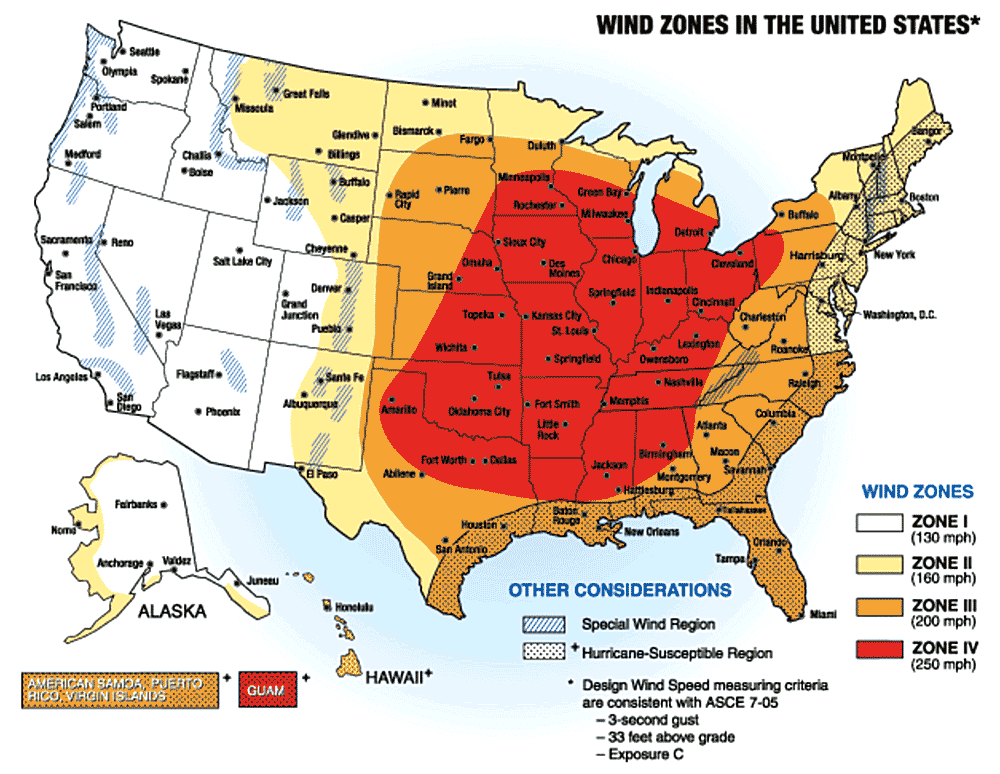 Severe weather often serves as a disastrous reminder of the need for strong, wind-resistant structures. In an average year, approximately 1,000 tornadoes occur across the country—75 percent of those recorded in the world. Most often, tornadoes occur in the central and southern Plains, spanning up to eight states—an area often referred to as “tornado alley.” But, tornadoes can occur anywhere and have been recorded in nearly all states in every season.

Anticipating the Power of Severe Storms 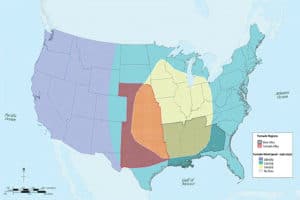 A tornado forms when changes in wind speed and direction create a horizontal spinning effect within a storm cell. This effect is then tipped vertically by air rising through the thunderclouds.

Although tornado-force winds can cause destruction to cars and buildings, most injuries and deaths are caused by flying debris. An average of 101 deaths occur annually due to tornadoes, compared to an average of one death annually from hurricane winds (2007 to 2017). Some insurance companies estimate property damage alone to be billions of dollars per year.

Over the years, building codes in areas at risk for earthquakes and hurricanes have been strengthened, while codes for wind events are often outdated or don’t exist. But whether or not building codes address high wind speeds, structures can be built to withstand them within reason. Insurance companies are starting to recommend building to higher wind-resistance standards, because they have discovered that keeping roofs and roof decks in place during wind events is a critical part of protecting buildings and people. Testing of roofs and their edge metal for resistance to high wind events has become top priority for some “at-risk” insurance companies.

Building owners can gather relevant data for existing roofs based on the calculation of resistance to high winds for roofs and their edge metal. Two commonly used tests are roof system uplift testing, a non-destructive test standard for most new and older roof systems, and the roof edge metal test, which is conducted to ensure roof and edge metal are secured to a standard based on a design wind pressure.

Terracon recently assisted a client along the Gulf Coast with improving an existing building shell to withstand a Category 5 hurricane wind force. Another client seeking to build a new headquarters building in tornado-prone North Texas chose to build beyond existing codes for a more wind-resistant structure.

Preserving the structural integrity of a building—including edge metal, windows, and roofing—can help it to resist the destructive forces of high winds. The right time to plan for an extreme wind event is before it happens. New and existing buildings can benefit from this expertise. Terracon can assist clients who wish to protect their buildings, assets, and users or occupants by providing recommendations for structural engineering, building enclosures, and cladding materials.

By providing recommendations for building foundations and materials used for edge metal, windows, and roofs, our experts help building owners make choices that provide long-term wind protection to existing structures and to new structures while in the planning phase.

“Tornado alley” is not a scientific or technical term, but it’s commonly used by news media to refer to an area in Central Texas extending north through Oklahoma, central Kansas and Nebraska, and eastern South Dakota; and may include Iowa, Missouri, Illinois, Indiana, and Ohio.

An even larger inland section of the U.S. is at risk of high or extreme winds that can put the safety of animals and humans at risk. Wind speed maps and charts can vary widely depending on the source.