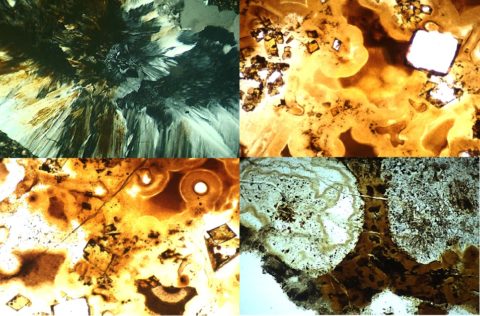 Chert is of interest to rock collectors, gemologists, geologists, and knappers (those who produce stone tools like those of Native Americans), and it is used in the production of sharpening stones and abrasive products. But one of the most common uses of chert is as part of the aggregate in concrete products.

Challenges caused by use

The issues relative to the presence of chert in concrete aggregate are two-fold. The physical properties of chert are variable – it can be non-porous and dense, or contain vugs*, macro pores, and micro pores, which render the chert highly absorbent. Absorption of water and subsequent freezing can result in what are commonly called “pop-outs” in the concrete because of the chert particles fracturing and dislodging from the concrete surface as a result of the expansion and contraction that can occur during the freeze-thaw cycle. Typically, these pop-outs are confined to the chert itself, and result in minimal damage to the surrounding concrete, although they can be cosmetically undesirable. In other cases, chert pop-outs can be a significant issue. For example, when they occur on airfield pavements they can lead to significant damage to landing or departing aircraft. Loose chert particles from pop-outs on a runway can cause airplane tire damage and can even be ingested by jet engines.

Of even more significance is the chemical composition of the chert. Because chert is essentially silicon dioxide, certain types of chert (chalcedony, opal, agate) can chemically react with the alkalis (sodium and potassium) present in Portland cement, the key bonding ingredient in structural concrete. The chert and alkali interaction cause a reaction known as alkali-silica reactivity (ASR). ASR can result in the formation of expansive amorphous (non-crystalline) silica gels, and in turn result in severe damage to structural concrete. These issues often happen over time and may not be obvious early in the life of the concrete.

Preventing issues down the road

Fortunately, testing for potential damage due to chert content can be performed before the first batch of concrete is placed on a project. Terracon can perform laboratory testing to pre-qualify the proposed aggregates to assess aggregate chert content and potential reactivity to avert potential issues. Analysis of in-place structural concrete can also be done on specimens from the existing structure that may show signs of deterioration so that issues can be assessed and solutions addressed.

Once initiated in the presence of water, ASR is progressive and irreversible. For this reason, the initial identification of the presence and quantity of chert by a qualified petrographer, such as Terracon can provide, prior to use as concrete aggregate is recommended. If chert is found to be present, more sophisticated mortar bar tests can be used to determine whether the chert is indeed reactive with the alkalis in the Portland Cement and, if so, the rate of mortar bar expansion and potential mitigation measures needed before the mix designs are finalized and concrete is mixed.

*Vugs are irregular cavities in rock caused by dissolution of minerals, which may or may not be lined with crystals.

Terry Stransky is a Senior Project Geologist in the Materials Engineering Group in the Cincinnati Office, specializing in materials petrography, rock quarries, geological field mapping and laboratory testing of rock and concrete. He has  bachelor's and master's degrees in geology from Brooklyn College, and additional training in Geological Engineering from the University of Missouri at Rolla (now Missouri S&T University).  Terry is  a Professional Geologist (P.G.) in Indiana and Kentucky.

Stewart Abrams is a recent graduate in geology from Morehead State University (Kentucky) with a specialty in materials petrography and rockfills.  He is currently employed as a field materials technician in Terracon’s Portsmouth, Ohio office.