Not All Cracks are Created Equally 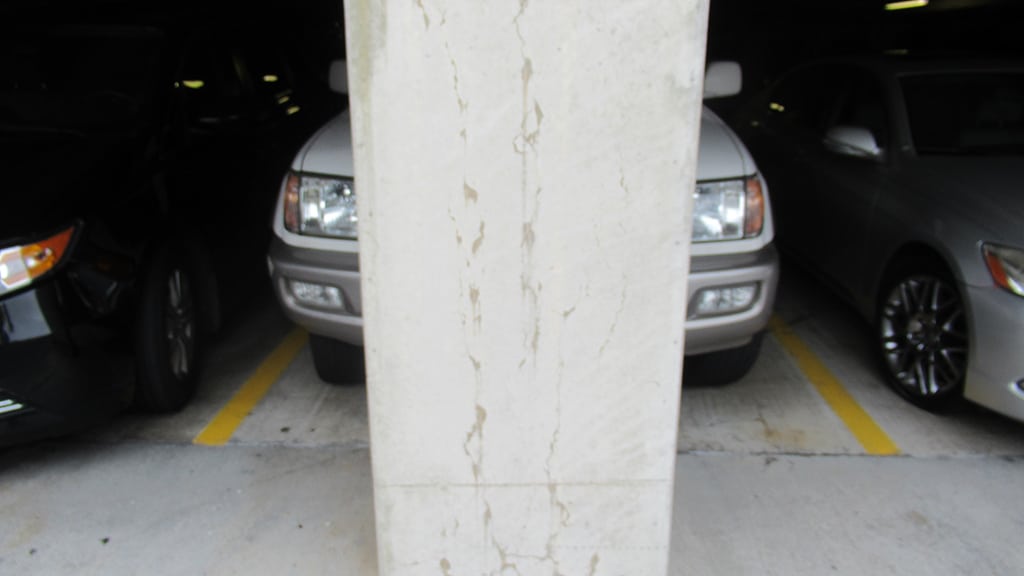 Investigating the unusual cracks in these columns helped avoid a possible catastrophic failure of this parking structure.

When the potential buyers of a property that included a parking structure noticed some unusual cracking in the columns, they decided to have it checked out. This timely action likely prevented a possible life-safety issue, and at a minimum helped maintain the structure’s effective useful service life by addressing the identified issues.

Terracon performed a property condition  assessment with an emphasis on the structural system of the parking deck, which is located in Winston-Salem, N.C. The facility includes a five-level, partially below-grade parking deck for a Class A office building, constructed circa 1990. The parking deck structural framing consists of a reinforced concrete precast double-tee system supported by perimeter beams and columns, and interior shear walls.

Engaging a consultant who evaluates a structure from a holistic view of structural performance, including assessment of materials issues that could lead to life-safety hazards, is critical.

During the visual structural condition assessment, severe map pattern cracking and concrete deterioration conditions were observed at the perimeter columns and corbels supporting perimeter girders. The Terracon team shared concerns with the client about potential issues, including alkali-silica reaction (ASR) in the concrete. ASR is better known as “cancer of concrete” and more like a pre-existing condition that keeps worsening given the right environment to foster. 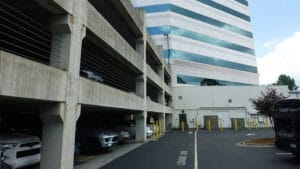 Although ASR is not a common issue in North Carolina, the observed cracks were a cause of concern. A previous assessment of this parking structure was performed by another firm and had not identified these cracks as an issue to be addressed.

The property owners granted access to Terracon on behalf of the purchasing team to perform limited materials testing to diagnose the cause of the column cracking. Terracon team members including concrete materials and parking structure specialists developed an assessment program that included retrieving concrete core specimens from the parking structure columns, and performing a petrographic examination.

Due to the construction formation of the parking deck, spot repair of the columns was not possible. Any spot repair work performed on the affected columns would have been temporary, short-term repairs. Also, since ASR deterioration of concrete is an internal concrete material failure mechanism leading to subsequent structural failure, all repair solutions would include only mitigation, with possibility of future deterioration if optimal conditions for ASR to progress were encountered. Hence, we recommended replacement of the perimeter columns as a long-term solution to restore the expected service life of the garage structure. With an estimated replacement cost of $90,000 to $130,000 per column for at least 20 columns, it was expected to be approximately an investment in the range of $1.8 – 2.6 million. Our evaluation provided a much better understanding of the property for our client, who was a potential buyer.

Financial concerns are important, but the life-safety aspect of this project was more serious. A parking deck in this condition is subject to possible catastrophic failure, potentially putting lives and property at risk. Engaging a consultant who evaluates a structure from a holistic view of structural performance, including assessment of materials issues that could lead to life-safety hazards, is critical for facilities owners and the public at large.

Our client was very appreciative of the services performed. Terracon potentially saved the client millions of dollars in restoration and maintenance costs of the parking deck. Although an enhanced engineering evaluation may appear to be unnecessary at times, it is proven that the cost of an evaluation provides a manifold return on investment, including financial and life-safety. 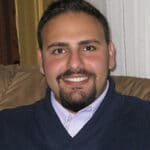 Sepehr Sabooree, P.E., is a project engineer specializing in forensic structural engineering and structural non-destructive testing based in Terracon’s Atlanta office. He has more than 10 years’ experience in structural design and structural forensics evaluation.

Be part of a company committed to your career success. Start Your Career
We use cookies on our website to give you the most relevant experience, remembering your preferences for repeat visits. By clicking “Accept,” you consent to the use of all cookies. For more information, please read our Read More.
Cookie settingsACCEPT
Manage Cookie Consent