Undoing Decades of Brine Contamination in a Few Weeks 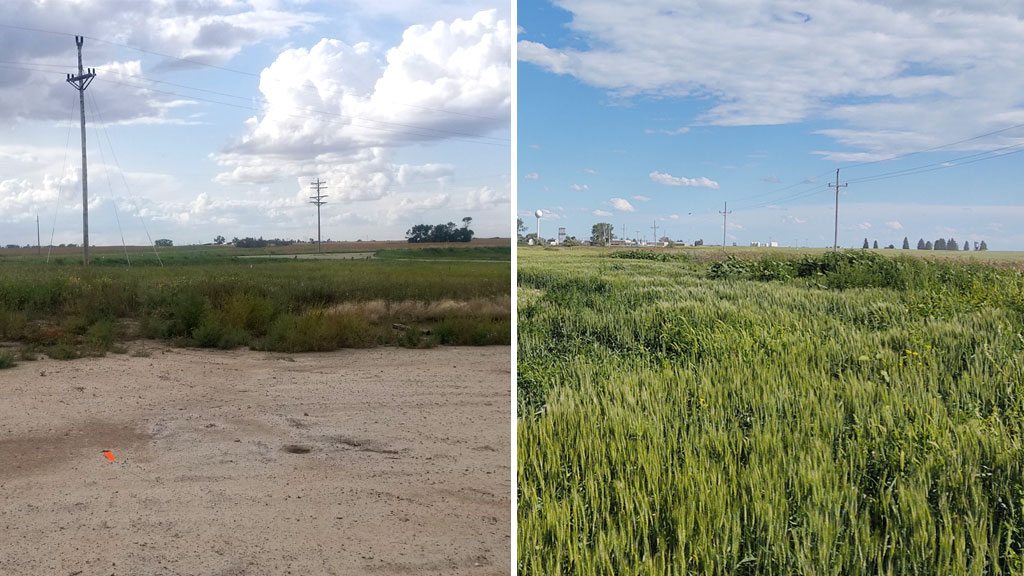 The project site before (left) and after (right).

Thousands of acres of farmland across North Dakota have been dormant for 50 years or longer due to brine contamination from historical oil and gas activities. An unprotected, one-acre brine pond could ruin 10-20 acres of adjacent farmland over time. Current standard brine remediation methods can cost between $2-3 million per site, a cost not economically viable considering there may be more than 2,500 sites in need of remediation in North Dakota.

The North Dakota Industrial Commission (NDIC) asked Terracon to develop a solution. After more than two years of field and laboratory research, our Fargo office created a multi-tiered method that eliminates the need for soil disposal and can reduce traditional remediation costs by up to 90 percent – we call it Terracon’s brine remediation Combined Technology Approach (CTA).

Assessing Soil Salinity from Above 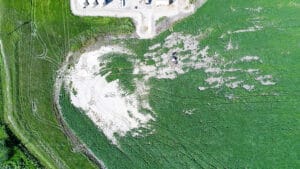 The site before the project began

We paired the electrical conductivity data with vegetation mapping using photographs from an unmanned aircraft, or drone, creating an accurate method for obtaining salinity of the top 2-3 feet of soil, minimizing the need for traditional drilling, sampling, and analysis.

Traditional brine remediation involves removing the top three feet of contaminated soil and replacing it with fresh soil, a method that can be both inefficient and ultimately ineffective. Removing and disposing of contaminated soil is expensive, and fresh soil is a finite commodity. Plus, residual brine contaminates the fresh soil in a year or two once the water table rises. Terracon examined ten different remediation methods, combining a variety of new and traditional technologies to find a suitable solution.

The process starts by temporarily removing the top three feet of soil. To combat the rising water table, the team installed a 6-inch capillary break of gravel on the test site. The gravel acts as a capillary break, preventing salts from rising back to the surface. Brine from underneath is directed to a catch basin and ultimately to a nearby phytoremediation pond, where plants like cattails naturally absorb excess salt. 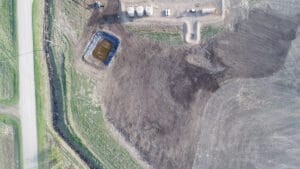 The project site ready to be seeded.

Rather than disposing of and replacing contaminated soil, the team instead added soil amendments, including gypsum and straw to the previously removed backfill. The straw helps bulk the soil to be more permeable and the gypsum breaks the bond between salt and soil, allowing the salt to be flushed away over time. Assuming average precipitation, soil salinity levels return to normal within one to three years.

Undoing decades of brine contamination over a period of years is slow and costly to monitor. Our team discovered the secret catalyst – adding water, a lot of water! Flooding the test site allowed us to simulate approximately two years of precipitation in just four to six weeks. Using the capillary break, soil amendments, and flooding on 158 soil samples in the laboratory, the team achieved crop germination in all samples.

Backed with this data, Terracon took our brine remediation CTA approach full-scale this spring at the Glenburn Oilfield near Glenburn, N.D. Wheat was planted on a half-acre plot of farmland that had undergone Terracon’s CTA method. Germination of the crop confirmed that the EC and chloride were back to levels that can sustain agricultural practices, and the plot will once again be productive farmland. This new brine remediation method will be implemented by Terracon on sites in Texas, Oklahoma, and Ohio. The ability to safely remove salt deposits – without the need to replace and dispose contaminated soil – presents the opportunity to reclaim thousands of acres of land at a fraction of the time and cost. 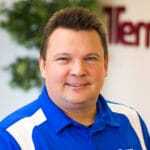 Jon Ellingson, P.G., C.P.G, is the office manager for Terracon's West Fargo, Grand Forks, and Jamestown, N.D. offices and directs the environmental group throughout the state. He has more than 22 years of experience in reclamation, mineral resource exploration, and remediation (specializing in brine remediation). 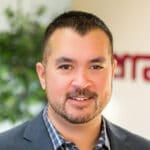 Leif Schonteich, CSP, CHMM, is a senior client development specialist in Terracon’s Rocky Mountain Division and the acting environmental department manager for Fargo. He has more than 20 years of experience consulting, designing, and managing safety and environmentally sensitive projects and is responsible for searching for new business opportunities and developing and fostering long-term client relationships.