Calling All Bats, We Hear You: Acoustic Sampling for Endangered Bats

Bats might not be the first thing that come to mind when planning a development project, but these unique and often protected creatures play a vital role in their ecosystem. In the summer of 2016, a team of scientists, biologists, and geologists were contracted to conduct a threatened and endangered (T&E) bat survey of a 590-acre wooded project site near Nashville. These types of presence or absence surveys are used to collect data, to determine a project’s potential impacts on area habitat, and, if a habitat is verified, provide recommendations for safe site development.

Due to the quantity of wooded land within the project, habitat was assumed to be present by U.S. Fish and Wildlife Service (USWFS). The site is located within the range of known federally-endangered Indiana bats and threatened Northern long eared bats.  As such, we knew on-site evaluation would be required to satisfy USFWS and the U.S. Army Corps of Engineers (USACE) requirements before federal permits could be released for the project.

Typically for endangered bat evaluations, first a survey is conducted to determine if the project has bat-conducive habitat. Federal survey guidelines for bat evaluations allow two options for evaluating if T&E bats are present; mist netting or acoustic surveys. These guidelines are designed to determine if any of the trees within the project area are serving as a maternity roost. At times up to 100 adult bats can be found in these particular trees, which can be used year after year. If such a tree is located, it can be protected by federal statutes similar to a Bald Eagles nest depending on the species. 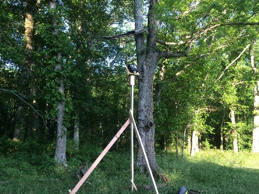 Both mist netting and acoustic surveys have limitations. Mist netting has been a standard method for evaluating bat populations for decades. This methods places thin-laced netting in a narrow tree corridor where bats are likely to fly at night. Scientists wait and during periods of bat activity, capture and identify bats. It is simple, safe, and effective method. However, issues arise in that many species won’t happen to fly through the selected corridor. The other major challenge is cost. Mist netting guidelines for central Tennessee recommend 9 net nights per 123 acres. This means two scientists staying approximately 45 nights – a method of evaluation quite costly for such a large area.

Acoustic survey sampling consists of setting up data recorders to monitor for sub-sonic sounds bats make to navigate at night while feeding. Each species has a particular set of calls, which can be identified by computer software with an accuracy rate of 75-80 percent. Guidelines for acoustic recording in the area recommend 4 detector nights per 123 acres or approximately 20 nights. In this sampling setup detectors are preset to record in the evenings and retrieved in the morning, eliminating overnight field stays and providing a more cost-efficient option. 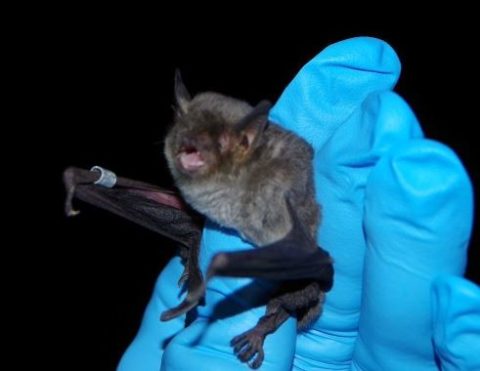 One night of acoustic sampling yields approximately 2GB of data, which bat call computer software can filter in about two hours. During the project, Anabat II acoustic recorders collected 94,315 bat pulses, which the software filtered down into 2,074 total bat passes and identified 11 species, including one potential endangered Indiana bat. After consultation with USFWS, it was deemed only a few nights of mist netting were needed in limited locations to verify if endangered Indiana bats were actually present. The mist netting captured five species though none were Indiana bats. A federally-endangered Gray bat was captured, but as its roost habitat occurs only in caves, no impacts to the species were expected.

By combining the acoustic survey data with a traditional sampling method, Terracon was able to assist our client in navigating environmental rules and regulations while reducing the total cost of the project. The T&E survey provided conclusive results demonstrating that endangered species of bats would not be impacted and created a viable option for private development.

Jon Hart is a biologist in the Chattanooga office specializing in ecological assessments, including threatened and endangered bat acoustic analysis.

Travis Stamper is a senior scientist and specializes in environmental assessments. He also has experience in delineating wetlands/waters of the United States and evaluating habitats of threatened and endangered species.

John Reinert is a professional geologist in the Chattanooga office and specializes in environmental assessments and geologic exploration.