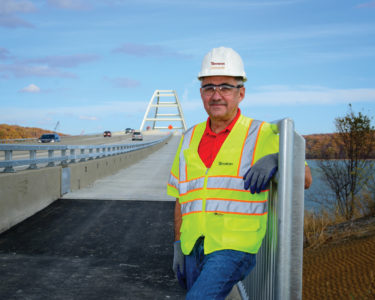 Factoring in the possibility of an earthquake or seismic event when evaluating soil conditions for a bridge replacement near the Kentucky and Tennessee border is not usually a consideration. However, for the $449 million Lake Bridges project in the Land Between the Lakes region in western Kentucky, it was crucial.

Seismic loading demands had to be taken into consideration for this project due to the proximity of Kentucky Lake and Lake Barkley to the New Madrid Seismic Zone, also known as the New Madrid Fault Line. As the first lake crossings below the lakes’ dams, the possibility of added seismic stress on the bridges’ structural elements due to the nearby fault line had to be included in a thorough geotechnical evaluation.

Considered vital to the region’s economy when complete, the two new bridges will have four, 11-foot-wide lanes as well as four-foot-wide shoulders and a 10-foot-wide multi-use path for pedestrians and cyclists. The project will make travel in the area much more convenient and open up recreation and economic development opportunities in western Kentucky.

With nearly 40 years of environmental and geotechnical experience to draw on, Terracon’s Ron Ebelhar says this project was one to remember. While serving as 2015 chairman of the board for ASTM International, an authority on manufacturing and materials standards, he also spent time closer to his home in Cincinnati – managing the geotechnical construction phase for the Lake Bridges project, one of the largest geotechnical projects ever undertaken by the Kentucky Transportation Cabinet (KYTC). ”The
large differences in soil and rock conditions between the two lakes and the presence of liquefiable soil, bedded chert, and karst bedrock added up to some unusual challenges for design and construction and
made this project memorable,” he stated.

Working in the lab, the team conducted a variety of soil and rock classification tests, strength and compressibility, resonant column, and cyclic simple shear tests to assess soil response under both
static and dynamic loading conditions and to identify the specific site conditions. Selection for each bridge foundation type was influenced more by the soil and rock conditions than the New Madrid seismic zone. Ron’s take on this: “Most projects have a relatively short cycle from start to finish. We’ve been working on this since 2007 and will see completion of the second bridge in late 2017. But what makes it doubly memorable is the range of site characterization tools, complexity of the soil and rock conditions, seismic analyses, and foundation design considerations, all of which rolled together into a tremendous opportunity for us to showcase our skills and resources.” 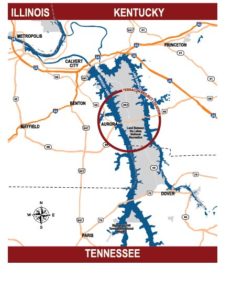 Site characterization results made way for a unique design solution. The Kentucky Lake Bridge piers are supported on 6-foot-diameter driven pipe piles with constrictor plates positioned about 50 feet above the pile tips. As an alternative to shafts, these allowed enough pile penetration to develop lateral resistance to barge impact and earthquake loads, needing then only to be driven a relatively short distance to develop the required axial resistance by forcing a soil plug inside the pile. Terracon developed plans for a design phase pile load test program, contract notes for installation and monitoring of the pipe piles, and assisted KYTC with the review of contractor submittals and pile monitoring data for the acceptance of the piles.

With the right design solution in hand, the 550-foot-long main span arch, constructed on barges, was able to be floated out and lifted into place in just one day, a sight Ron now adds to his list of career highlights. “Seeing the bridge lifted onto the piers and knowing the years of preparation that went into the project was incredibly rewarding for our entire team,” said Ron.

The Kentucky Lake Bridge was completed in August and construction is under way on the sister bridge over Lake Barkley. As one of Terracon’s largest-ever geotechnical transportation projects, it is a showcase for not only Ron, but also KYTC and our entire company.