Could a tunnel constructed more than 50 years ago still rapidly drain a reservoir if a catastrophe happened? This was the question Terracon helped answer regarding the 185-foot deep reservoir at the Broken Bow Hydroelectric Dam in Broken Bow, Okla.

Following Hurricane Katrina in 2005, the United States Army Corps of Engineers (USACE) mandated that each public reservoir be retrofitted to drain if there was a catastrophic event threatening the stability of the reservoir’s dam. To comply with this requirement, Terracon joined the team led by Mead & Hunt to evaluate the complex geology, subsurface conditions, and the concrete tunnel liner condition to determine the stability of the existing tunnel. To make sure the 18-foot diameter diversion tunnel met stability requirements, the USACE needed a geotechnical study performed. In the study, the USACE requested that no test borings, rock coring, or destructive testing of the tunnel liner be performed.

As part of the team, Terracon developed a multi-stage work plan to understand the original tunnel construction and assess its current condition. Boxes of USACE files of the original dam construction documents were reviewed, including 14 soil test boring logs, geological studies of the steeply dipping rock formations, and construction plans and photographs of the 1960s construction. 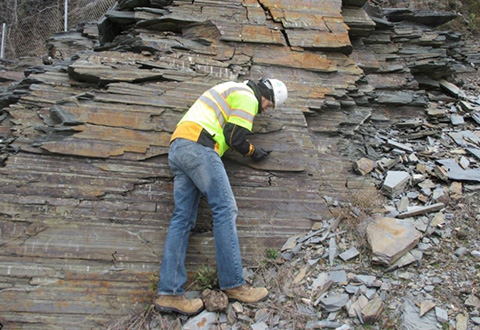 After gaining a thorough understanding of the tunnel design and the geotechnical/geologic conditions, it was time to investigate the tunnel with the team. With the safety of the workers a priority, Terracon crafted a 200-plus-page safety plan including an activity hazard analysis for each team member responsible for accessing the wet tunnel and climbing the rock outcrops.

The work plan included a review and geologic mapping of nearby outcrops of the same rock formations cut by the original tunnel excavation and performing sensitivity analyses. Geologic strike and dip measurements were made, as well as joint spacing and the location of faults and discontinuities. The team then interpreted aerial Light Detection and Ranging (LiDAR) images of four major outcrops for joint patterns and bedding characteristics of the native bedrock. Rose Diagrams and Stereonet Pole plots were created to define structural geology properties such as the dominant orientation of bedding planes, folds, and faults. Using the collected data, Terracon provided calculated estimates for the Rock Mass Rating characterization parameters (RMR) and the Rock Quality Designation (RQD) for the rock along the tunnel alignment, as well as Headcut Erodability indices. 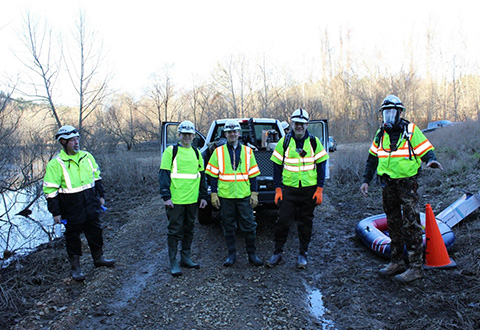 The next stage of work included conducting a detailed visual condition study of the concrete tunnel liner, documenting the location and width of all cracks, mapping areas of seepage, and estimating seepage flow. To approximate the compressive strength of the tunnel’s liner concrete, the team also performed Windsor Probe testing. Terracon performed ground penetrating radar (GPR) data acquisition to determine the concrete liner thickness, assess the presence of voids in the liner, and to detect the presence of delaminations within the concrete.

Terracon concluded that most of the original tunnel liner was in good structural condition and suitable for use as an emergency spillway of the Broken Bow Reservoir under high velocity flow. The conclusion that the 55-year-old liner could perform under catastrophic loading was great news. The report did document local areas where the concrete liner was detached from the bedrock face, as well as many areas where active seepage was occurring. To control seepage and fill voids in the liner created by the original wooden blocking points and rotted timber cribbing, Terracon recommended the tunnel liner be pressure grouted with chemical grout.

Controlled and engineered weep holes would be designed and placed through the concrete tunnel liner to relieve hydrostatic pressures. This fast-paced, detailed study was impacted by record rainfalls during the data-gathering field operation. This project was truly a collaborative and seamless effort with Mead & Hunt and the Tulsa District USACE personnel.