The evaluation of compressive strength of in-place concrete is often needed for projects of new constructions, structural additions and remodeling, and structural repairs. Traditional method of testing the compressive strength of concrete cores retrieved from a structure can be time-consuming and possibly damaging to the structure when a large number of structural members are under evaluation.  Alternative methods that reduce the needs of coring and cause no damage or limited superficial local damage to the structure are becoming more popular. 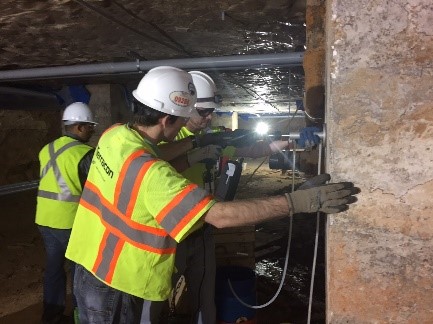 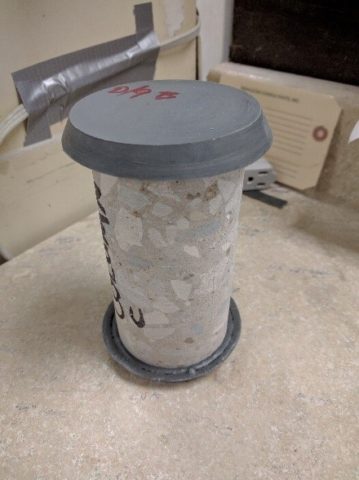 The Terracon team recently worked with a client on a project where a sixteen-story steel framing structure is proposed to be built on an existing twelve-year-old one-story reinforced concrete structure. The concrete mixture design information and concrete material testing records for the in-place concrete were not available to the client. To assist the client in determining if the existing reinforced concrete structure had sufficient capacity to carry the load from the proposed steel structure, pullout testing was performed on three footings and twenty-nine plinths which were identified as critical structural members by the structural engineer of record.

Terracon performed both core strength testing and pullout testing on 15 structural concrete members to develop a job-specific strength correlation. Once the strength correlation was established, the in-place concrete strength of additional members was estimated with pullout testing only. Pullout testing at each additional location was completed in about 40 minutes total from sample preparation to strength estimation The results indicated that the concrete compressive strengths were structurally adequate per the acceptance criteria given by ACI 221.1R. The pullout testing procedure allowed for testing of more locations more efficiently than if only testing core samples. A significant delay in project schedule was avoided.

Pullout testing is just one of the several NDT techniques that Terracon uses to evaluate in-place concrete strength, depending on project variables. Terracon is experienced with field and laboratory testing and statistical analysis, which assures NDT options that can be coordinated with the client and reliable and resourceful services are delivered in a cost-efficient and time-saving manner. 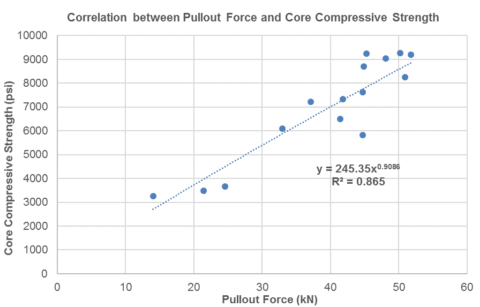 Jigar Desai, Ph.D., P.E., Jigar is office manager as part of Terracon’s Facilities Services team in our Houston office. He serves as a technical leader in Terracon’s Engineering Diagnostics services and consults on materials/structural diagnostics projects with a focus on concrete structures.