The year was 1989 and as a student of the University of Illinois, I was witness to one of the greatest teams to ever grace the floor of Assembly Hall; home of the “Flyin Illini.” It was an exciting time to be a fan as the team was taking the college basketball world on a breath-taking flight all the way to the NCAA Tournament Final Four. Twenty-three years later, I was proud to be a member of another great Illini team; the team tasked with designing and overseeing the $170 million renovation of Assembly Hall, now the State Farm Center.

The State Farm Center serves as the main indoor sports and entertainment arena at University of Illinois at Urbana/Champagne (UIUC) and is listed on the National Register of Historic Places by the Illinois Historic Preservation Agency for its historical and architectural significance chiefly due to the structure’s reinforced concrete dome/bowl configuration that exhibits one of the largest examples of this type of construction in the world. 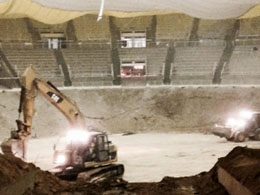 The project design and abatement oversight services proved challenging with the decision to continue to utilize the arena throughout the construction period. The project work was performed in six phases, with major demolition activity typically corresponding to work during phases conducted during the basketball off-season (March to November). This meant that abatement of environmental hazards (when Terracon’s work was principally required) was compressed into tighter timeframes in the early days of the off-season to allow demolition and re-construction work to move forward as soon as feasible, and be completed before the beginning of the next season.

Abatement oversight was closely coordinated with AECOM and UIUC’s construction manager, Turner-Clayco. The dynamic scheduling needs required almost 1,400 hours of Terracon oversight throughout the course of the project.   Demolition of the existing arena floor, lower seating bowl, and transformation of two existing mechanical rooms began the day after conclusion of the 2015 basketball season.  We were required to be on-site for approximately 20 hours per day, six days a week for three weeks totaling nearly 400 oversight man-hours.

When asbestos-containing waterproofing was discovered under the one-inch thick concrete topping slab in the north mechanical room, immediate removal was required. Terracon mobilized a team of asbestos professionals to provide 24-hour abatement oversight coverage for eight straight days to maintain the schedule and continue construction of the Orange Krush Club.

On November 29, 2016, the University, donors, Big Ten officials, and the design and construction management team attended the official State Farm Center re-dedication ceremony. This spectacular project was celebrated in style and topped off by the Illini men’s basketball team victory in the ACC-Big Ten Challenge, a great way to finish off a great project. Go Illini!

Jon Hart is a biologist in the Chattanooga office specializing in ecological assessments, including threatened and endangered bat acoustic analysis.

Travis Stamper is a senior scientist and specializes in environmental assessments. He also has experience in delineating wetlands/waters of the United States and evaluating habitats of threatened and endangered species.

John Reinert is a professional geologist in the Chattanooga office and specializes in environmental assessments and geologic exploration.