Diving Deep: Diving for Data in an Icy Underwater Investigation

Spanning Lake Champlain and adjoining the cities of North Hero and Grand Isle, Vt., is the only functioning drawbridge in the Vermont Agency of Transportation’s (VTrans) highway system. The historic 63-year-old structure was slated to be redesigned in 2017, but due to the volume of both vehicle and ship traffic, repairs were needed to keep the bridge open until construction could begin. VTrans called Terracon to perform underwater investigations to get the data needed to make repairs.

Diving Into The Challenge 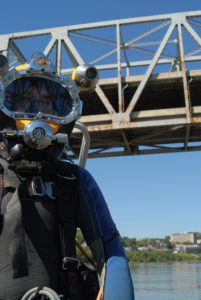 One of the first tasks for the Terracon team was to locate any buried submarine cables near the drawbridge structure and make sure they were secure. After reviewing location device options, our team decided to use a handheld, underwater metal detector to locate the cables, a quick and cost-saving option.

The team’s biggest challenge was to cut and extract twelve 4-inch diameter cores from the existing foundation of the bridge. Working ten days straight, in extreme conditions, we were able to collect all the information the design engineer requested, under budget and on time. Coring was the most difficult and time-consuming part of the process. The aggregate in the concrete of this bridge was difficult to get through and coring became an underwater battle.

The project began in the middle of May when water temperatures ranged from 35-38 degrees. To keep our diver warm, a system was used to pump hot water to the diver while working, allowing him to stay in the water for longer periods of time. A three-person dive team was assembled to perform the underwater tasks. With a dive supervisor, diver, and tender cross-trained to perform all jobs, a rotation was developed to keep all members fresh and able to perform the work.

Keeping The Project – And The Drawbridge – Moving

The team also had to contend with the drawbridge opening every hour to let ships pass through. Each time the bridge was moved, we had to disconnect all air hoses, adding a time-intensive extra step to the planning process. The lost time had to be recovered in the schedule by working early and staying late to ensure all work was complete for the day.

Despite high winds, rain, and even snow, the Terracon dive team delivered the necessary data to get the job done. The team collaborated with VTrans and all project participants to thoroughly plan and determine the most effective approach to perform the work including addressing the challenges of frigid water temperatures and ongoing drawbridge operations. Through these partnerships, the project was completed safely within the estimated timeframe and under budget.

Jason Hickey, P.E., is a project manager in our Cincinnati office. He has experience with all aspects of construction materials testing and inspection including soil, concrete, asphalt, and steel. Jason coordinates and manages large testing and inspection projects including staffing, training, coordinating with contractors, quality assurance, and quality control. He has managed private commercial and public transportation projects such as highways and airfields