When a Tennessee highway department looking to replace a box culvert bridge realized that the stream below might contain endangered species, an environmental survey was needed before work could continue. Terracon environmental professionals answered the call. 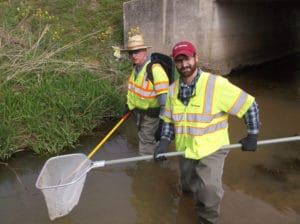 Terracon project team members included biologists trained in fisheries surveys. Armed with a Smith-Root™ backpack electrofisher, the team went to work. The electrofisher uses low current electricity in varied pulse bandwidths to temporarily stun fish so they can be caught for sampling. Using triple pass depletion efforts upstream and downstream of the bridge, they were able to quickly assess whether endangered species were present.

The Tennessee Wildlife Resource Agency (TWRA) also had an interest in this study because of the possible presence of a rare and critically near-extinct fish species, the Barrens topminnow (Fundulus julisia), is often found in Tennessee’s Coffee County, just southeast of Nashville and near the project site.

Working in tandem with the TWRA and the local highway department, Terracon’s fisheries survey found eight fish species present near the bridge. Although no Barrens topminnows were found, a bright-colored minnow, the Flame chub (Hemitremia flammea), was identified. Often found near springs, the Flame chub is listed as a species of ‘Greatest Conservation Need’ status within the state. While the Flame chub is not in immediate danger of extinction, its limited populations throughout the region caused TWRA to stay involved with the project.

The 13 Flame chubs found were all noted upstream of the culvert and isolated by the box culvert. TWRA opted to have the Flame chubs relocated prior to bridge construction and the channel diverted for culvert installation – a common solution when dealing with sensitive or rare fish species.

By relocating the fish, the Terracon team also prevented further possible isolation and their demise as the summer heat lowered stream levels, preventing downstream migration through the existing culvert.

Fortunately, most fishery surveys are not a major project expense. In this case, Terracon was able to accurately assess the stream within a day, limiting additional costs and addressing important environmental concerns.

Working collaboratively with TWRA and the client, Terracon quickly resolved the threatened and endangered species issues and kept the project on budget and on schedule with minimal delays. A commitment to providing safe, knowledgeable, and effective environmental services allows public entities and private-sector developers alike to deliver successful, operationally viable projects within environmental rules and regulations.

Jon Hart is a biologist in the Chattanooga office specializing in ecological assessments, including Tennessee fisheries. He holds a Tennessee Wildlife Resource Agency scientific sampling permit which was used during the project.

Travis Stamper, P.E., is a senior scientist in the Chattanooga office and specializes in environmental assessments. He also has experience in delineating wetlands/waters of the U.S. and evaluating habitats of threatened and endangered species.

Dallas Whitmill, P.E., is the environmental department manager in the Chattanooga office who specializes in environmental assessments and remediation