Mussels on the Move: Preserving Threatened Species through Environmental Surveys 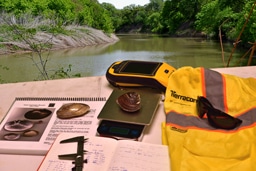 Mussels. They may not seem like the rock stars of the animal kingdom – they’re not cuddly, or tasty – but they play an important role in their natural habitats. Freshwater mussels (Unionidae) benefit rivers and streams by filtering algae and small particles from the water, acting as a natural purification system. Mussels are an indicator species; without them, a key player in the environment would be missing. Once that happens, the whole habitat can fall apart pretty rapidly.

One such habitat is the Trinity River, which runs through Fort Worth, Texas. According to Texas Mussel Watch, a program administered by the Texas Parks and Wildlife Department, Texas is home to more than 50 species of native freshwater mussels – 15 of which are listed as threatened at the state level and six of those 15 considered candidates for federal listing under the Endangered Species Act.

In 2013, as a design-build expansion of a bridge spanning the river was getting underway, a survey of the riverbed was needed to protect state-listed mussels from disturbance caused by the project. An environmental compliance subconsultant to the design-build contractor called on Terracon to provide professionals with experience identifying freshwater mussels.

Given the accelerated nature and rapidly-changing schedules of design-build delivery, Terracon’s biologists completed all necessary safety training in advance of field work and were “on call” for a period of several months until the timing was right to begin on-site work. That call came in late July 2014, and during the first week of August, they assisted our client’s malacologist (mussel specialist) with identifying and assessing mussels at two locations near the bridge crossing at the Trinity River.

Project team members included commercial divers who performed a tactile search over five-foot by five-foot sections that were chosen from a grid at random. They took measurements that included water temperature, water depth, air temperature, and substrate conditions. The team members then brought the mussels to shore to be identified, weighed, measured, and stored alive for relocation by Terracon’s biologists.

During the weeklong survey, a total of 33 live mussels were identified and assessed as representing three different species: the Giant Floater (Pyganodon grandis), the Fragile Papershell (Leptodea fragilis), and the Southern Mapleleaf (Quadrula apiculata). Fortunately, none of the species were identified as threatened by the Texas Parks and Wildlife Department, and the team transported the live mussels to nearby Quanah Parker Park, placing them back into the Trinity River. Future surveys may be conducted at the release location to evaluate survival of the relocated mussels. If threatened mussels had been discovered, the Texas and U.S. parks and wildlife department would have been notified and given the survey data to support their efforts to monitor the location and health of the specimens.

Unfortunately, Texas doesn’t have a monopoly on threatened and endangered mussels. Many states, and the U.S. Fish and Wildlife Service, have listed freshwater mussel species. Fortunately, more public infrastructure agencies and private-sector developers are calling on companies like Terracon to help them minimize the impacts of projects on mussels and other creatures.

Mussel preservation was almost unheard of until recently, but now that mussels are being added to threatened and endangered lists, more surveys are coming up, especially with road and bridge building on or near rivers.

Such surveys don’t have to come at the expense of the project, as demonstrated by the successful delivery of the Trinity River bridge expansion. We can help keep our clients within the environmental rules and regulations as well as keeping the project on time and in budget.

In addition to their role in purifying rivers and streams, mussels also play an important role in the broader ecosystem. Many different kinds of wildlife eat mussels, including raccoons, otters, herons, and egrets. Most freshwater mussels live burrowed in sand and gravel at the bottom of rivers and streams. They are usually present in groups called beds. Beds of mussels may range in size from smaller than a square foot to many acres; these mussel beds can be a hard “cobble” on the lake, river, or stream bottom which supports other species of fish, aquatic insects, and worms. Bridges, flooding, and invasive species are among the main threats to the survival of various mussel species in the United States.