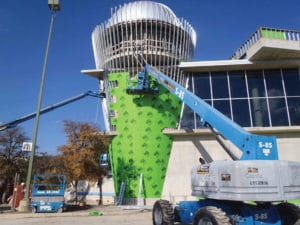 With a unique new design that includes an observatory dome 40 feet above the ground, half of its planetarium dome outside of the building, and multiple exterior cladding systems; some say the building looks like a spaceship.

The original San Antonio College Planetarium opened as part of the Alamo College System in 1961 and has entertained and educated more than 2 million people. The facility was rededicated in 1994 as the Scobee Planetarium to honor NASA astronaut and former San Antonio College student, Francis R. Scobee, who served as commander of the Space Shuttle Challenger’s tragic final flight in 1986.

Unique building designs pose challenges to construction teams, and the Scobee Planetarium’s recent renovation project was no different. Terracon’s Facilities group worked closely with the project team providing consultation that addressed these challenges, kept the project on schedule, and contributed to a safe, waterproof structure.

The project involved expansion of the facility from 3,950 to 21,519 square feet by adding a new wing called the Challenger Learning Center. DHR Architects designed the new structure and prepared construction documents for the project team that included Parsons as project manager and Vaughn Construction as renovation contractor.

THE DOME CHALLENGE
New renovation plans called for half of the planetarium dome to be inside the new building and the other half exposed to the elements. The existing dome was stripped down to its concrete roof in preparation for installation of exterior cladding systems that would surround the dome including a curtain wall system, metal rain screen panels, and built-up roofing. Parsons’ management knew that the dome system was a critical juncture from the start of the project, according to Gary Verlinden, project manager.

“We embarked on a project that was very customized and by its design, presented numerous unique intersections of dissimilar materials,” Verlinden said. The design required an expansion joint between the existing dome structure and the new construction that allowed for differential movement. This expansion joint at the envelope plane had to bridge the existing concrete dome and adjacent materials.

The expansion joint also started at the ground level in vertical application that transitioned horizontally and back to vertical on the adjacent side of the dome. Each deferring material intersection required specific details to achieve envelope tightness goals, and all differing material intersections required seamless transitions to one another to traverse the entire 78-foot length of the dome. 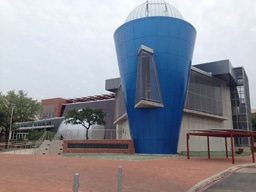 THE DOME SOLUTION
Terracon worked with the design team and recommended the appropriate expansion joint products to use on the dome. Terracon also provided details and strategies to the project team that contributed to a finished building that allowed for potential structural movement between the existing facility and new materials while not impeding the unique architectural design intent of the building’s exterior finishes.

“Terracon provided technical expertise in reviewing and recommending the appropriate products and strategies that contributed to a successful project,” Verlinden added. “They conducted extensive daily site observations and also played a role in the design/constructability reviews, submittal reviews, and addressing request for information questions on items related to the building envelope.”

READY FOR LIFTOFF
Today, the newly renovated Scobee Planetarium and Challenger Learning Center are open for students and public visits. Team collaboration and problem solving during construction contributed to this project’s success. Since the facility’s reopening in October 2014 it has already become an iconic city structure recognized as part of San Antonio’s cultural landscape.