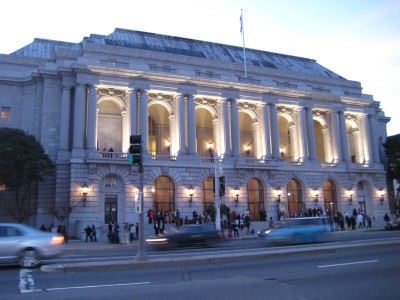 Many who have worked in the field of hazardous materials consulting for a long period of time will tell you that they have seen it all when it comes to project challenges, but Terracon recently encountered an unusual situation while monitoring a hazardous materials abatement project at the historic Veteran’s Building at the San Francisco War Memorial.

The building, dedicated in 1932, has served veteran organizations and other military groups, who hold hundreds of meetings annually in the facility that also houses a law library, and the famous Herbst Theater. The building has also hosted momentous events like the original signing of the United Nations Charter in 1945. It is a landmark institution owned and operated by the City and County of San Francisco.

In 1989, The Loma Prieta earthquake caused damage at all levels of the historic building. A seismic assessment concluded that if another major earthquake occurred, the structure would sustain significant damage and pose appreciable life safety hazards to building occupants. In addition, the building has deteriorated building systems, comprised largely of the original 1932 equipment including 80-year-old boilers. As part of the project design team for the $97 million seismic upgrade, restoration, and renovation project, Terracon developed and defined a hazardous materials removal scope of work and provided abatement monitoring during removal of those materials.

A notable challenge that Terracon addressed during abatement activities involved pipe insulation in hard-to-reach wall cavities located throughout the fourth floor. The pipe insulation had an asbestos-containing sealant that required removal from the building, but this process necessitated construction of protective containment structures around the pipes during removal to prevent asbestos releases. Because the pipes were located in dozens of places throughout the fourth floor, the initial plan to remove this hidden challenge was complicated and very labor intensive.

Terracon, however,  designed an alternative containment system, knowing  of a little-used clause in the California Asbestos in Construction Standard (8 CCR 1529), which allows  an accredited Project Designer, who is also a licensed Professional Engineer, to design alternative containment systems. Terracon personnel had these credentials and were familiar with the facility from conducting an initial hazardous materials survey.

The design solution for removing the pipes involved the abatement contactor disconnecting the pipes at the floor level and pulling the structures out of the building through the attic. The alternative containment strategy also involved water misting while the pipe was being carefully lifted into the attic level where it was promptly wrapped and labeled for disposal.

A task that might have taken a crew of four abatement workers up to two days for each pipe was instead completed by a crew of three workers in just a few hours. During removal procedures, Terracon conducted background and perimeter sampling during each pipe removal to demonstrate the effectiveness of the alternative containment system, which was successful. The procedure was repeated in more than 12 locations saving more than 10 days of abatement time, keeping the project on schedule, and saving the client thousands of dollars. The building is scheduled to re-open in late 2015.